22 national parks and 32 nature reserves are now located in Kenya. Besides bathing tourism, these are one of the main reasons why visitors travel to Kenya. There are fantastic landscapes and huge herds of wild animals to be seen.

But what makes the individual parks so special? We have collected some facts for you which you may not have known yet:

Kenya’s oldest national park is located just outside Nairobi. This is the only one in the world that is set up in a city.
Apart from elephants, it is home to all the animals of the Big Five – it is particularly known for its high number of black rhinoceroses. 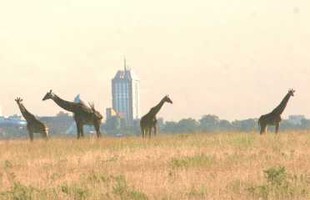 There live giraffes with cognac-coloured fur, which seems to be covered by a white spider’s web. They carry the name web-giraffes and occur only in the north of Kenya. A further representative is the giraffe-gazelle, that owes its name to the extremely long neck. And also the rare Gravy Zebra is resident there, the biggest, nowadays living zebra.

Lewa reserve
Already known? During a stay there, the British heir to the throne Prince William proposed marriage to his long-time girlfriend Kate Middleton. But the sanctuary should also be worthwhile if you don’t want to propose, but simply want to enjoy the fantastic animal world.

Sweetwaters-National Park
The park is located in Nanyuki. It is home to many wild animals, but the orphaned chimpanzees are a special feature. They originate from the Jane Goodall Institute in Burundi, but were evacuated there when the civil war broke out in Rwanda in 1994.

Lake Nakuru National Park
When you stand in front of the lake, you literally see everything through pink glasses. Over 2 million flamingos stretch out in front of you and cover the lake with a fluffy pink blanket – a unique sight!

Lake Bogoria National Park
Lake Bogoria is a saline, alkaline lake, known for its huge geyser concentration. Numerous hot springs and geysers on the shores of the lake testify to volcanic activity in this region of the Great Rift Valley. The (so far known) 18 geysers spit their fountains up to 5 meters high.

Amboseli National Park
Last but not least, unfortunately a rather sad fact: The park is known for its huge elephant herds – did you know that the gentle pachyderms mourn the loss of an animal from their herd? Often they return to the scene of the accident for days on end to hold a kind of wake.

We hope you enjoyed our facts! If you still have funny, exciting or perhaps sad facts about the national parks, please let us know.